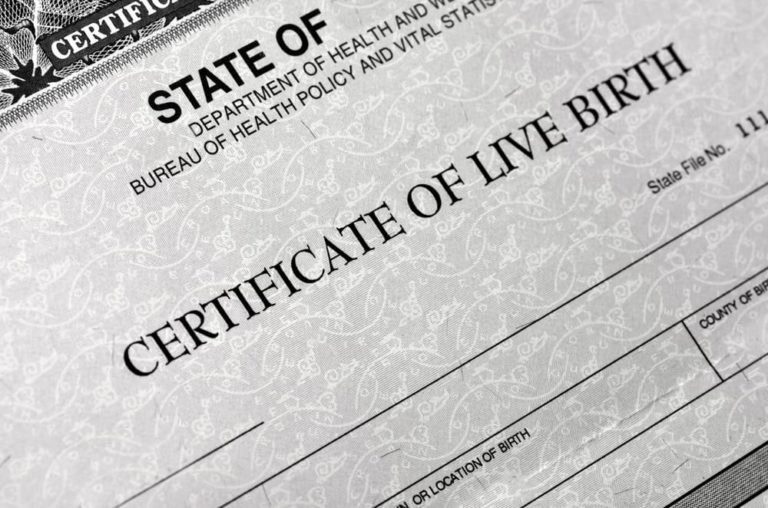 Whose Name Goes On The Birth Certificate In Surrogacy?

When a child is born in the U.S., he or she is automatically considered a U.S. citizen and has the right to a U.S. birth certificate. That is true if the biological mother or a surrogate gives birth, so the first reporting of the birth to the Office of Vital Records is the same. From that point onward the details can be different; while the U.S. National Center for Health Statistics has standard recommended forms to record births, states are free to make their own forms that may appear different and need different content.

These discrepancies from state to state – and sometimes, county – mean it's very important that you have a good understanding of the laws where your baby will be born. Normally, the birth certificate forms are completed by the individual who attended the birth or a hospital administrator. The forms are then forwarded to a state or local registrar. In case of a surrogacy birth, these forms might have to be adjusted so they legally reflect the parents' names rather than the surrogate's.

The names which are shown on the infant's birth certificate will mostly depend on the surrogacy laws in a particular state. Many surrogacy-friendly states allow prospective parents to submit a pre-birth order, which instructs the hospital to add their names on the original birth certificate.

In other instances, the birth certificate might have to be re-issued with the intended parents' names after additional legal work is done after the baby is born. In certain states, same-sex couples will have to complete a same-sex parent adoption so both parents will be recorded on the birth certificate.

In traditional surrogacy, the surrogate is the biological mother of the child, and her name will show on the original birth certificate together with the intended father's name. A stepparent adoption may be needed for the other parent to be recorded on the birth certificate. Single fathers with a spouse have the choice of completing a second parent adoption if their state law permits.

A pre-birth arrangement is a contract which assigns the intended parents as the parents of the baby that's born through surrogacy. But not every state acknowledges pre-birth orders, and that's the reason why you'll have to work together with your surrogacy agency and attorney to ascertain how pre-birth orders may be relevant to your case.

A pre-birth order can direct the hospital to release the baby to the intended parents following discharge or order the state's Office of Vital Records to name the parents on the infant's birth certificate. Some states do not issue pre-birth orders and instead need a post-birth order to grant legal parentage to the baby’s parents. The Office of Vital Records may need the hard data, meaning that the surrogate's name will initially be mentioned on the birth certificate. A post-birth order will change this to reflect the proper parentage.

If you reside in a state that does recognize pre-birth orders, then you typically sign one around the surrogate's sixth month of pregnancy. It's worth noting that the arrangement won't go into effect until the day when the baby is born.

In the event your state doesn't recognize pre-birth orders, your surrogacy agency and/or attorney will start working on a pre-planned adoption program which will enable the intended parents' names to be recorded on the baby’s birth certificate.

For any questions concerning pre-birth orders and birth certificates, please contact us.